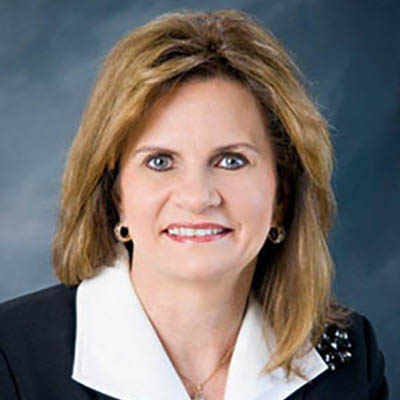 Born in Maben, Mississippi in 1963 and a graduate of Starkville Academy, Tuck holds a Bachelor of Arts in Political Science and a Master of Public Administration from Mississippi State University as well as a Juris Doctor from the Mississippi College School of Law.

In 1990, at age 27, Tuck was elected as a Democrat to serve in the Mississippi State Senate representing her native district of Oktibbeha, Webster, Choctaw, and Montgomery counties, eventually serving as Secretary of the Senate. In 1995, she narrowly lost the Democratic primary for Secretary of State against Eric Clark. Then, in 1999, she defeated Bill Hawks in her first race for Lieutenant Governor.

Tuck's first term as lieutenant governor was characterized by her switch from the Democratic Party to the Republican Party, a move which garnered national attention in late 2002. Tuck ran for her second term as Lieutenant Governor and her first race as a Republican in 2003 against state senator Barbara Blackmon and won with 61% of the vote. The most notable event of her second term was the Category 5 Hurricane Katrina, which utterly devastated the Mississippi Gulf Coast in the summer of 2005. Along with Governor Haley Barbour, Tuck led the state's efforts to help the coast – a strong focal point for the state in terms of tourism, industry, and population - recover and rebuild in the initial months and years following the storm.

As term limits laws in Mississippi preclude Lieutenant Governors from seeking a third term, Tuck's role was succeeded by then State Auditor and future Governor Phil Bryant in the 2007 election.

When her term as Lieutenant Governor officially ended in January 2008, the Mississippi Institutions of Higher Learning Board of Trustees approved her to immediately begin an appointment as special assistant to the President of her alma mater, MSU, where she continues to work today. In her current position, she is the Vice-President of Campus Services, where she oversees key matters such as facilities management, parking and transit, and construction.