Materials relating to or from the general time period of the American Civil War. 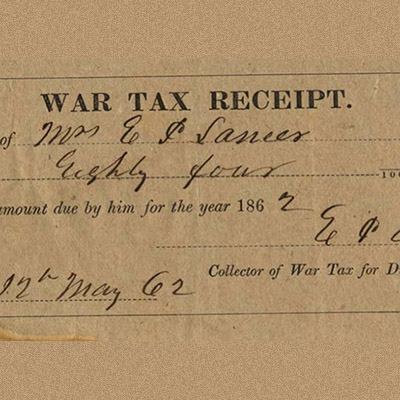 This collection comprises 150 documents published between 1850 and 1865, primarily documenting Mississippi and Mississippians, and containing subject matter that contributes to a better understanding of the non-military aspects of the Civil War. The collection contains 96 civilian letters (1853-1865) documenting sentiment about the war and the lives of families and individuals, including comments on religion, children, death, motherhood, the preparation of clothing and food, agriculture and livestock management, medicine and disease, courtship and marriage, slaves, politics, education and other aspects of daily life. The letters also include comments on battles and other military news and concerning family members and friends serving in the Confederate Army. Also included are 47 business, financial and estate documents produced during the war and providing information about taxation, cotton production and impressment, purchases of household goods, payments for tuition and medical expenses, the hiring of slaves and expenses for their support. Miscellaneous documents (7) include political broadsides, poems, prospectus for a book of poems, a list of church members which includes slaves, and the minutes and list of attendees for a Cumberland Church conference.

The Association of Southeastern Research Libraries (ASERL) organization and its member libraries seek to further contribute to the growing corpus of online scholarship by collaboratively developing a digitized collection of materials collectively titled "The Intellectual Underpinnings of the American Civil War." This collection includes materials of any type or subject published between 1850 and 1865, and may or may not be directly related to the War itself. The overriding goal is to provide improved access to materials that informed the public consciousness as America devolved into battling sections of North and South. The entire body of materials can be viewed at http://american-south.galileo.usg.edu/.