On behalf of the Exhibits Committee I am pleased to announce the opening of EN PLEIN AIR: Selected Paintings by Kate Freeman Clark, a capsule exhibit of paintings from the Kate Freeman Clark Art Gallery in Holly Springs, MS. There are eight paintings, which will be on display in the John Grisham Room on the 3rd Floor of Mitchell Memorial Library starting on August 10, 2021. The John Grisham Room is open from 8 AM to 5 PM Monday to Friday. There will be an opening reception on August 12 from 3-4 PM; refreshments will be provided. A virtual gallery talk is planned for later in the semester.

Kate Freeman Clark was a significant Mississippi artist. Born in Holly Springs, MS in 1875, and raised in Holly Springs and New York City, she was inspired to begin her artistic career after visiting the World’s Columbian Exposition in Chicago in 1893. She studied with Impressionist William Merritt Chase, founder of what is now the Parsons School of Design, first at the Art Students League in New York City, and then at Chase’s Shinnecock Hills Summer School of Art on eastern Long Island. On Long Island, Clark mastered the technique of painting en plain air, or outdoors.

Clark spent most of her career in New York City, exhibiting widely across the Northeast. She sometime signed her paintings as “Freeman Clark,” to avoid discrimination due to her gender. Her last exhibition was at the Men’s Club of New York, in 1918.

Following a series of person and professional losses – William Merritt Chase died in 1916, her grandmother in 1919 and her mother in 1922 – Clark left the art world behind and returned to Holly Springs in 1924. She would never paint again. On her death in 1957, she surprised her neighbors by bequeathing 1200 paintings to the town of Holly Springs, which served as the foundation for the Kate Freeman Clark Museum.

The paintings on display here, a small fraction of the works available at the museum, reflect the diversity of landscapes and cityscapes available in New York, as well as the light and dark polarities of Clark’s artistic interests. 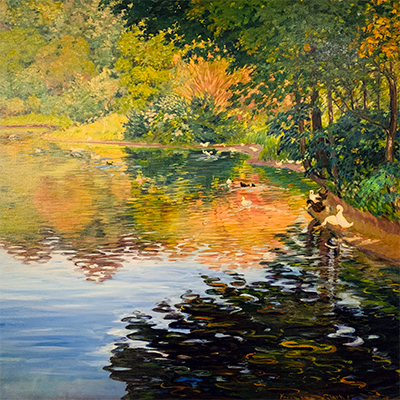 The paintings are on display in the John Grisham Room on the 3rd Floor of Mitchell Memorial Library.