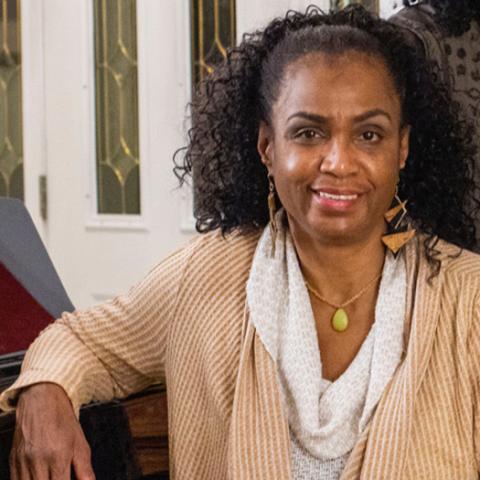 Taslimah P. Bey began studying classical music at age 16, then switched to jazz in her senior year of high school.  She started researching ragtime music and the roots of jazz while in college.  When Taslimah heard Charlie Gabriel—clarinet and saxophone player with the Preservation Hall Jazz Band—play his horn, the music she had been reading about came alive. She formed Taslimah’s Ragtime Band, which featured the compositions of early ragtime composers, including Scott Joplin, Jelly Roll Morton, Tom Turpin, Artie Matthews, Harry P. Guy and James P. Johnson. For her efforts in performing the music and lecturing on the lives of these highly talented 20th century American composers, Taslimah received an award for the Preservation of African-American Music from the Society for the Culturally Concerned in Detroit.

Taslimah has performed at Jazz and Ragtime Festivals across the country, including the Scott Joplin Festival, where she was Artist-in-Residence for 2020, Greenfield Village’s Ragtime Street Fair, and the West Coast Ragtime Society’s Ragtime Festival.  She has also performed with the Preservation Hall Jazz Band in New Orleans, and at the Blue Note Jazz Café in New York City. Taslimah is also a member of Vincent York’s Jazzistry, a live music presentation covering 400 years of US music history, illustrating how jazz grew out of our shared multicultural heritage.

Taslimah’s Ragtime Band has also performed at the Detroit Institute of Arts as part of the Concert of Colors music festival. Taslimah was inducted into the historical archives at the Detroit Historical Museum as part of Veronica Johnson’s Detroit Women in Jazz exhibit. Taslimah can be heard on the Taslimah Bey, Live! and A Tribute to Ragtime CDs, available on Amazon, ITunes and CDBaby.com.