One of Charles H. Templeton's prize pieces was a Johnson A Phonograph dating from about 1900 and features a sewing machine motor. Templeton found the phonograph being used as a door stop in a Virginia shop. The New Century Disc Box produced in 1904 is rarest music box in his collection and is a shifter type with an 18 inch disc. There are only about six working models of this machine in the country today.

Also on display in the Museum is a 1910 Aeolian Orchestrelle player organ and a vintage 1925 Link player piano produced by the man who later designed the Link trainer for pilots in World War II. Templeton's favorite item was the 1920 Reproducing Piano which plays rolls imitating the performance of the original artist. For example, one roll has numbers played as composer George Gershwin performed them.

Around 1887, the Columbia Phonograph Company began issuing cylinders containing recordings of popular songs and military marches. The flat discs, forerunners of today's vinyl records, were introduced by Emile Berliner who also developed a practical method of duplicating hard plastic records by electroplating and stamping. Prior to 1896, the machines were hand cranked. It was Eldridge Johnson who first designed and built a motor and supplied them for Berliner. The following year, Johnson produced an improved gramophone featuring a new type of sound box. It is this machine that is used in the well-known trademark with "Nipper", the dog, listening to "His Master's Voice." In 1906, Victor Company produced the first phonograph with the amplifier horn enclosed—the Victrola.

All of these instruments and many more are represented in the Museum. The music boxes and other musical instruments in the Templeton Music Museum tell the story of the development of the fashionable and elegant musical machines enjoyed by the wealthy in the 19th century. 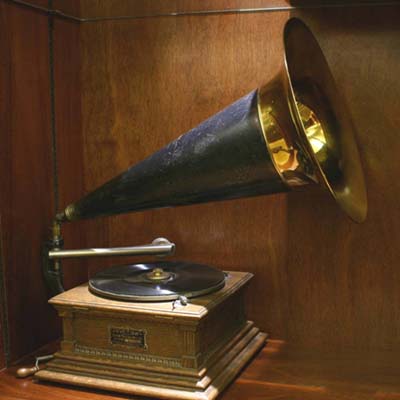 Visit the museum on the 4th floor of the Mitchell Memorial Libary.