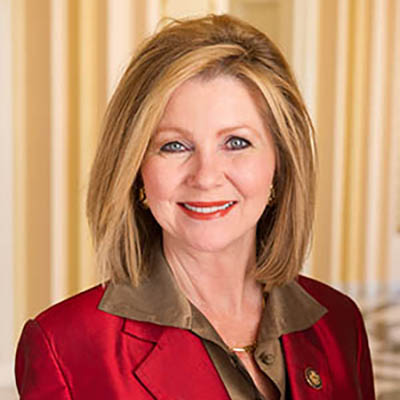 Congressman Blackburn is currently serving in the United States Congress representing the Seventh District of Tennessee.

Marsha Blackburn was born June 6, 1952 in Laurel, Mississippi. She was a 1973 graduate of Mississippi State University, receiving a Bachelor's of Science degree in Home Economics. While at Mississippi State she was a recipient of a 4-H Scholarship, was President of the Associated Women Students, and was a member of Gamma Beta Phi. She also worked as the Student Manager for the Southwestern Company, selling books door-to-door. Blackburn was one of the first female representatives for Southwestern in the South and she helped the company organize an all female sales division. In 1974 she married Chuck Blackburn and they eventually had two children, Chad and Mary Morgan.

Her professional career began in 1973 when she was hired as a sales manager for Times Mirror, Inc. In 1975 she was named Director of Retail Fashion and Special Events of the Caster Knott Co. Division of Mercantile Stores, Inc. She held this position until 1978, when, she became the owner of Marketing Strategies, a promotion-event management firm. She continues to run this business to this day.

Congressman Blackburn was also the founder of the Williamson County, TN, Young Republicans. In 1989, she was named the Chair of the Williamson County Republican Party. She ran for the 6th Tennessee District seat in the U. S. House of Representatives in 1992. That same year she was named a delegate to the Republican National convention. Although she lost the 1992 election, Congressman Blackburn continued to be active in social and political venues in the State of Tennessee. From 1995 to 1997 she was the Executive Director of the Tennessee Film, Entertainment, and Music Commission. Through this position she was able to help protect her State's creative community and also assist in attracting new investments in Tennessee.

The following year, 1998, she became the first woman ever elected to Tennessee's State Senate from the 23rd District. She served in the State Senate for four years, rising to the position of Minority Whip. While in the State Senate she gained national attention from her stance against the establishment of a state tax. In 2002, she again became a candidate for the U. S. House of Representatives, this time for the 7th Tennessee District. She was successful in this endeavor and took her seat in the House on January 3, 2003.

Congressman Blackburn has been a member of the American Council of Young Political Leaders, the Arthritis Foundation, the Tennessee Chambers of Congress, the Country Music Association, the Nashville Symphony Guild, the National Association of Retail Merchants, and the Foundation of Women Legislators.